SkyCity Entertainment, New Zealand’s only listed casino operator, is likely to post a loss in the first half of fiscal 2021 as the Covid-19 pandemic hits, the country’s largest brokerage firm said.

Craigs Investment Partners said in a note that its revised forecasts take into account the closure of all SkyCity properties for eight weeks and that it will take two years for tourist numbers to recover.

“We estimate SKC’s monthly cash burn rate at around $35 million while the properties are closed, meaning its $425 million of available funds is sufficient for almost 12 months of closure,” Craigs said.

It adds that there is a risk of the company breaching banking covenants, but expects “debt holders could be flexible if trading restrictions have been lifted and there is a path to recovery of earnings, but we also now expect SKC to raise new equity,” and suggests that $300 million would give the company greater headroom.

The company announced on Friday that it would lay off 200 staff and that another 900 would be affected in future. Capex has been slashed and no new projects will be undertaken although the building of the International Convention Centre and the Horizon Hotel in Auckland and completing the revamp of the Adelaide hotel and casino will continue. Executive pay has been slashed and other staff will be asked to take pay cuts to retain jobs and cut costs. 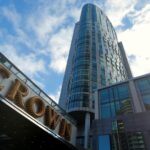