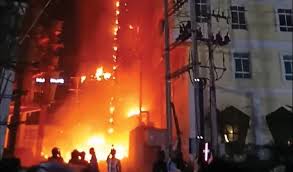 Six people have been injured after a fire broke out at an 18-floor casino building in Poipet on Monday night, according to a statement from a senior police official.

Major General Ath Khem, police chief of Banteay Meanchey province, said the fire broke out at 9:30 pm at the complex known as Golden Casino – starting at the casino’s elevator on the fourth floor before spreading to the 13th floor.

“No one died in the flames. However, six men got injured due to smoke inhalation while they got trapped in the lift,” said the police chief in comments to Xinhua.

Ath Khem added that all those in the casino were successfully evacuated from the casino through an emergency exit.

It is understood that the majority of the visitors to the casino were from China.