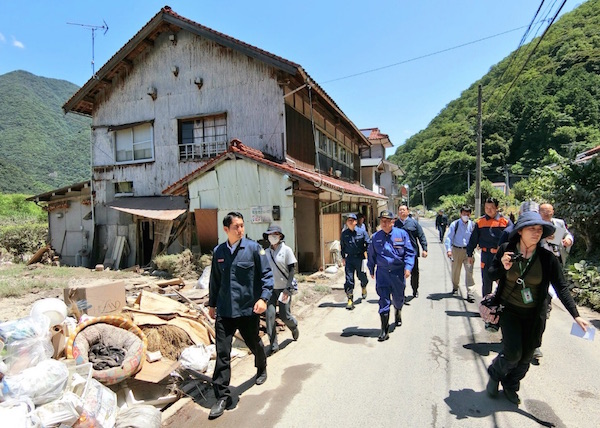 Yukio Edano, head of the largest opposition force, Constitutional Democratic Party of Japan, toured areas of the country ravaged by the recent rainstorms and told reporters, “The opposition had proposed that the government concentrate on the disasters, but instead they gave priority to casinos. Does this not provide sufficient grounds for a vote of no confidence?”

At some point this week it is now expected that opposition parties will call for a “no confidence” motion against the government, though it will be easily voted down by the ruling coalition which dominates the legislature.

Buoying the opposition are Asahi Shinbun polls conducted over the weekend. One of them found that only 17 percent of the public believes the IR Implementation Bill should be passed in the current Diet session, while 76 percent find it to be “not necessary.”

Moreover, the opposition criticisms also seem to have impacted the public’s view of the government’s flooding disaster response. Only 32 percent of those polled said that they had a positive view of how the Abe administration had handled the disaster, while 45 percent had a negative view.

On the other hand, the ruling coalition Komeito party, which was once a major obstacle to the casino legalization program, is now urging the government to hurry up and pass the IR Implementation Bill at the end of this week.

Komeito is worried that delaying passage of the legislation to the autumn would only serve to further cloud the electoral prospects of the ruling coalition in the unified local elections next spring and the House of Councillors elections next summer.

July 20 remains the most likely date for the enactment of the IR Implementation Bill into law.