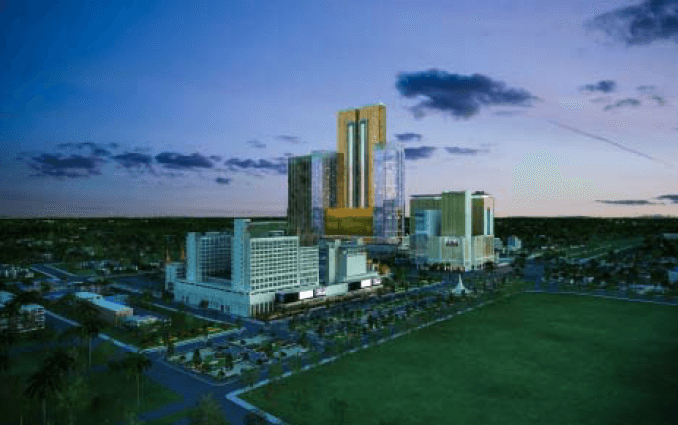 Hong Kong-listed Nagacorp on Thursday released details of its much anticipated Naga 3 project to its shareholders on the Hong Kong Stock Exchange.

According to a filing, the Naga 3 Project is set to deliver greater gaming and non-gaming spaces, comprising of amenities and facilities not available at Naga 1 and 2, including high-tech virtual reality interactive indoor theme parks, more shopping, and MICE facilities and family recreational areas.

The project will also consist of five distinct hotel towers, with some managed by well-known international hotel brands.

In its gaming space, the property feature NagaCorp’s “Casino Cell Concept” – large casino spaces are broken down into smaller spaces, each with its own entertainment, food and beverage and other integrated services.

The project is expected to incur approximately US$3.8 billion to US$4.0 billion in capital expenditure for its development.

However, Morgan Stanely analysts warned that Phase 3’s ambitions for more than 4,000 keys and huge capital expenditure may be a bit too ambitious.

“Yet, the funding gap remains. The company plans either a debt offering (high-interest
expense) or to get funding from the chairman (meaning future equity
dilution),” said the analysts.

The company’s announcement comes as it released its financial results for the first three months of 2019.

The number, however, came in weaker than Morgan Stanely analyst expectations of $409 million. MS said that both VIP rolling chip volume and mass were weaker sequentially, owing to seasonality.

Elsewhere - February 2, 2021
A January debt refinancing has had a "meaningful positive impact" on Mohegan Tribal Gaming Authority's liquidity, says Moody's Investor Services, explaining why it has upgraded its Corporate Family Rating to Caa1 from Caa2 and Probability of Default Rating to Caa1-PD from Caa2-PD.

Macau - February 4, 2021
Long-time Macau civil servant, Lio Chi Chong, has been sworn in as deputy director of the Gaming Inspection and Coordination Bureau. His prior positions included a stint in the judiciary police.