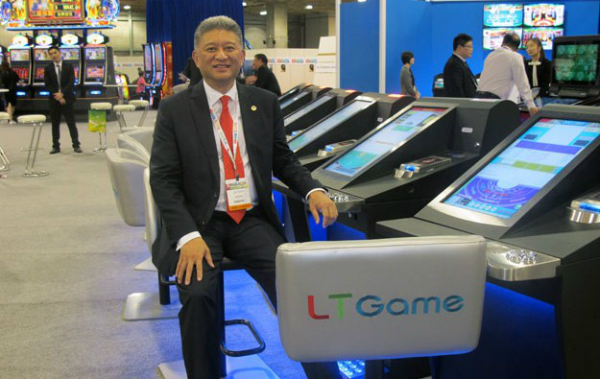 LT Game, which dominates the live multi-game sector in Macau, is focusing its attention on a new range of slot machine products and expects to sell 500 units worldwide next year, says Jay Chun, chairman of parent company Paradise Entertainment.

The company is entering a crowded market, whose clientele are well known for their preference for baccarat tables over slots. Macau only gets about 6 percent of total revenue from slot machines, although growth in the number of machines has grown due to government-imposed table caps and the opening of Cotai’s multi-billion dollar resorts.

Still, Chun sees room for expansion and says his company’s products are in tune with local tastes.

“Big players do not have that many titles. They just bring a few products,” he said. “That leaves us a lot of space. We believe the products will work. The Asian style is important for us and we import topics or graphics that the locals are familiar with.”

“Hopefully we can sell 500 next year, that is our target,” he adds.

Chun said the ever rising cost base in Macau, where labor is a significant expense for casino operators, will help to drive customers to machine-based gaming. As dealer salaries rise, operators are likely to push up minimum bets, pricing some mass market players out of the game, he says.

“That’s why we think there is big demand.”

LT is targeting growth in Macau, but also further afield, particularly in the U.S. The company has a distribution accord with International Game Technology for its live and electronic table games systems in the U.S.

Some of the company’s slot products, such as video slot machine Tekken, have been developed by LT Japan and Bandai NAMCO Entertainment and feature Japanese cartoon-style characters, while others, such as Fortune Monkey, are emblazoned by the red and gold characters favored by the Chinese.

While the group expects most growth in the U.S. and Macau, it also sees Vietnam as a potentially strong market.

“Regionally, the Vietnam market is very good,” Chun says. “Two to five years from now it will be a very interesting market and a lot of manufacturing is moving there.”

Chun, who is also head of the Macau Gaming Equipment Manufacturers’ Association, said he was happy with this year’s MGS Gaming Show, despite some concerns expressed by suppliers that there had not been enough support from operators.

“The operators in Macau and regionally are very positive. We had representatives regionally from Korea, Vietnam and Cambodia and Japan sent an IR team to the show,” he said.

This year, MGS was jointly organized by the MGEMA, the Nam Kwong Culture and Creativity Industry Co., Ltd. and the China National Machinery Industry International Co., Ltd, which have extensive MICE experience in Mainland China.

“The reason we partnered with them was we want to bring a one-stop shopping experience for IRs, not just limited to gaming suppliers,” he said. “Most of the casinos have hotels and other facilities, so we want them to be able to buy those supplies too.”

Chun said he felt this was the right way for MGS to proceed, given the increasing focus on IRs in all their components, rather than just gaming. He adds online is not a good fit for Macau.

Hong Kong - April 12, 2021
Hong Kong police have busted a gambling den, arresting 65 people, including a 28-year old constable. The police officer has been suspended from duty.

No plans to bring non-resident foreigners back yet

Macau - April 15, 2021
Macau chief executive Ho Ian Seng has told lawmakers that there are currently no plans to relax restrictions on non-resident foreigners from entering Macau.