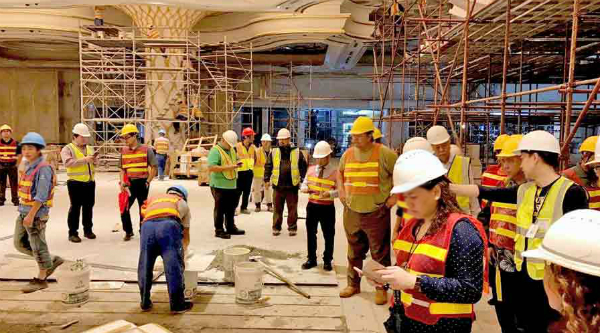 The Commonwealth Casino Commission has asked the Superior Court to lift a temporary restraining order that blocks the release of information said to show Imperial Pacific International owes millions of dollars to the Commonwealth of Northern Mariana Islands.

The CCC argues that IPI has “no likelihood” to succeed on the merits of the case, among other reasons, according to local media reports.

In petitioning for the restraining order Imperial Pacific, which is building Saipan’s only casino, argued that it would suffer immediate, irreparable injury if CCC discloses the tax information, which includes an audit report from Ernst & Young. The company claims the information is confidential.

The 27-page audit report is said to show the company owes the CNMI government $33 million in 2017 corporate income tax and $5 million in 2018 business gross receipt tax. IPI also owes vendors a total of $35 million. House Minority Leader Edwin Propst submitted the report to the House on Monday, the reports said.

In a separate case, a group of seven Chinese workers have been given the green light to proceed with a lawsuit against Imperial Pacific International, with the Chief Judge Ramona V. Manglona refusing the company’s petition to remove certain allegations for being “scandalous or impertinent.”

The judge did concede the workers painted the company in a poor light, according to the Saipan Tribune.

The workers are suing for compensation for the injuries they suffered during accidents at the casino project worksite.

IPI and its contractors Gold Mantis and MCC filed motions to dismiss the lawsuit, sought more definite statements, and sought to remove certain paragraphs in the suit.

The workers are suing the three companies for alleged forced labor in violation of the Trafficking Victims Protection Reauthorization Act and CNMI Anti-Trafficking Act, negligence, and liability for employees of sub-contractor.

The workers alleged that they were forced to work long hours for below minimum wage under extremely dangerous conditions at the casino worksite, the newspaper reports.