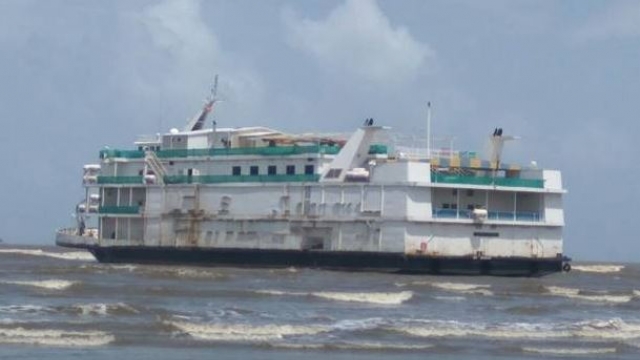 Goa’s sixth offshore casino, MV Lucky 7, has marooned itself on a sandbar whilst attempting to move from Mormugao harbor to Mandovi river in Panaji, local media reports.

According to Coast Guard Manoj Badkar, the vessel got stuck in the Aguada sandbar off the Miramar coast on Sunday.

One crew member  was injured while three were suffering from seasickness.

Aanand Madgaonkar, an expert salvager, said that the crew members took high risk to bring the vessel in when it is well known that the Aguada sandbar area is closed during the monsoon.

Last month, the MV Lucky 7 was given approval to anchor in Panaji as a refuge vessel due to the monsoon season.

Global Globe Hotels Pvt. Ltd, the owner of the vessel, had reportedly requested the high court for it to be allowed to dock over fears it would be heavily damaged in the sea during the monsoon.

“Despite clear warnings from the Captain of Ports, Captain Braganza, who is an experienced master mariner, the government overruled his advice not to allow the towing of the ship to the Mandovi river in the current weather and rough water conditions,” said AAP Goa spokesman Venzy Viegas.

“It clearly vindicates the AAP’s charge that this government, several preceding governments and all the politicians who are part of them are merely minions of the Casino lobby,” Viegas said.