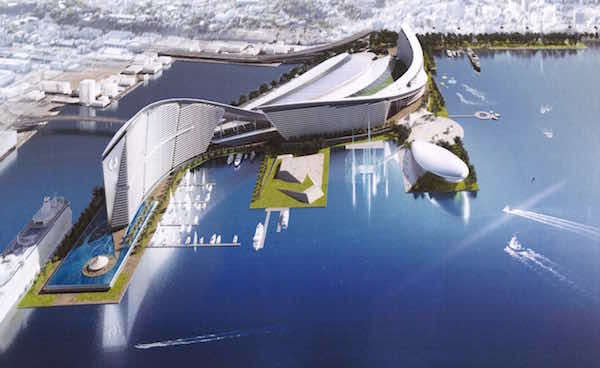 Caesars Entertainment unveiled its “100 Year Partnership for Japan” campaign, and made a number of significant announcements about recent developments in the firm’s local IR initiatives.

Among the materials were concept images for a Caesar’s IR at Yokohama’s Yamashita Pier. Based on the theme of The Great Wave by the Japanese ukiyo-e artist Hokusai, the concept is called the “Yokohama Art & Culture Park and Entertainment Resort.” It was among the materials that Caesars submitted to the Yokohama municipal government in the recently-concluded RFI process.

Caesars also revealed at its press conference that it is developing a special casino entry system for Japan that will use smartphones as its main instrument. The notion is that once customers register into the Caesars system, this mobile technology will allow a noninvasive and even polite method to track customer entry into the casinos and to identify potential instances of problem gambling.

However, one potential obstacle to Caesars’ vision in this respect is the question of whether or not Japanese regulators would be willing to accept a system that doesn’t require the production of a MyNumber Card each and every time a visitor enters the casino.

Also noted at the press conference was that Caesars’ JPY25 million (about $223,000) for responsible gaming initiatives in Japan, announced in February, had already been spent, and that a second budget of JPY25 million had been authorized.

Finally, it was apparent that Caesars has been quietly expanding its ground team in Japan, with two new faces at the press event: Shinya Okiyama, manager for Japan development, and Kengo Nishimura, head of government & community relations.

Although he didn’t speak in front of the cameras, also present in the background was Caesars’ Vice President for Strategic Investment Initiatives John Linss, a senior Las Vegas-based executive.

A Caesars representative declined to specify how large its ground team in Japan had now become, but did say that it is still growing and that the opening of branch offices outside of Tokyo is a distinct possibility.