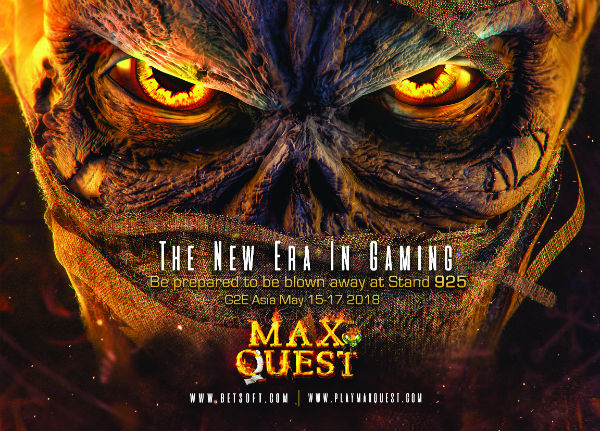 Betsoft is moving beyond the reels at this year’s G2E Asia with the next generation of igaming – MaxQuest.

Part of their new Interactive Gaming genre, this action-adventure, multiplayer gaming experience allows players to fully immerse themselves in gameplay like never before.

Players all over the world have the option to log on and experience Betsoft’s games through Betsoft’s VAULT engine, which offers access to one of the world’s largest desktop and mobile catalogues in slot gaming.

In the last few months, Betsoft have built on their already impressive collection of games which are the groundwork for the revolutionary titles to come.

One new application of this technology, the “trail system,” has already appeared in Legends of the Nile, Sugar Pop 2, and Reels of Wealth. These advancements are made possible by our progressive SHIFT engine, that allows for high-quality game development over multiple platforms at an incredibly small file size.

With item collection, achievements, and leaderboards, Betsoft are bringing the world of social games to their players.

This integrated gamification allows the fun and excitement of gameplay to last beyond just a single win and is guaranteed to have players coming back for more.

Visit Betsoft at G2E Asia stand 925 for a demo.