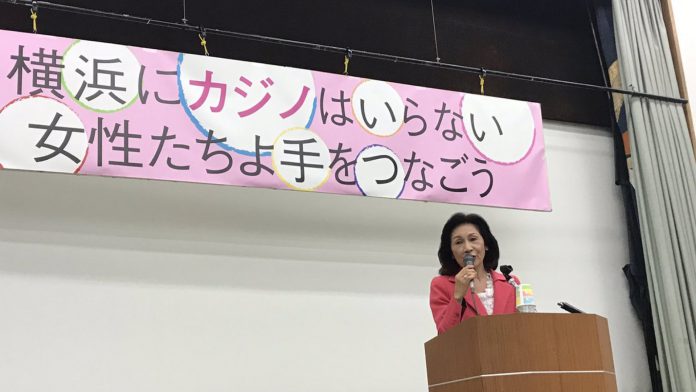 Saturday the 14th witnessed two separate rallies by opponents of casino legalization, one in Yokohama and the other in Osaka.

The larger of the two rallies were held in the Kanagawa Citizens’ Center in Yokohama, which packed the room with several hundred people. The keynote speech was delivered by former lawmaker Keiko Itokazu, who drew upon her experience in Okinawa: “There may be those who think ‘it’s a useless exercise to join the movement now,’ but I’m here to tell you that if you do take action, then things can change.”

She added, “Abenomics has not gone very well, and so now the government is aiming to revive the economy with casinos. But can we really activate our economy using casinos?”

The Yokohama event was attended by other national politicians of various opposition parties.

Meanwhile, the same day in Toyonaka city, Osaka, about 130 people gathered for the first anniversary of the launch of the “Citizens’ Association to Oppose Casinos in Osaka.”

The speeches at this event were led by a local lawyer, and the main argument was that the planned government measures to deal with the issue of gambling addiction are insufficient and likely to be ineffective.