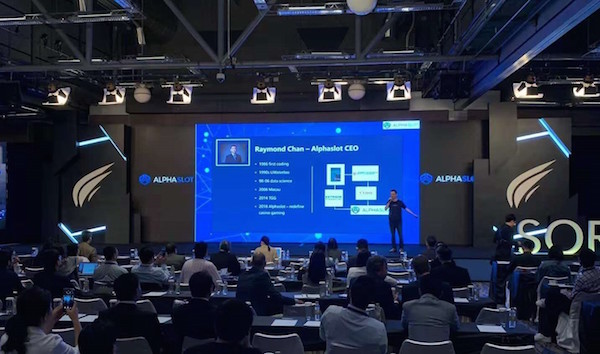 The first ever Sora Summit, which was designed to develop opportunities in the blockchain ecosystem, particularly in Asia, kicked off in Macau on Tuesday, attracting more than 70 speakers from key global stakeholders.

The gaming industry was represented by platinum sponsor Alphaslot, a blockchain-technology platform company based in Hong Kong, with CEO Raymond Chan and CIO Professor Joseph Chan performing a demonstration of their blockchain concept to an audience that included gaming industry executives. The demo included a live feed of a smartphone wallet app, successfully showing the rewarding of a token to a player’s wallet. “Blockchain technology is changing the gaming industry as we are talking,” Chan said.

Alphaslot aims to use blockchain technology and digital asset markets to provide innovative and effective ways to acquire new players and increase interaction with the games.

The topic of blockchain and gaming has been a hot one in recent months. The Malta Gaming Authority released their guidelines for distributed ledger technology (DLT) in gaming, with the first licensing applications for gaming businesses with DLT payment methods to be accepted from January 2019.

The Gaming Standards Association (GSA) in the US held their Technology Summit last week in Reno, Nevada, with the focus being solely on blockchain technology. Along with Alphaslot, Melco Resorts & Entertainment was also in attendance to present their take on the uses of blockchain in casino operation. Alphaslot is the first blockchain tech member of the GSA.