SJM Holdings Limited is the holding company of Sociedade de Jogos de Macau and one of the six companies authorised to operate casino games in Macau. SJM is the only casino gaming concessionaire with its roots in Macau. The company has 17 casinos, mostly on Peninsula Macau. The flagship Grand Lisboa features more than 400 rooms. 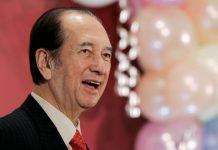 Stanley Ho’s passing should not have impact on SJM: Analysts

May 27, 2020
The death of Stanley Ho is not expected to have any impact on SJM Holdings’ operations, given Ho’s limited involvement in the business since 2009, say analysts.  Bernstein analysts note that the gaming mogul had effectively removed himself from SJM as early as 2009 after suffering a head injury and a series of brain surgeries.  […] 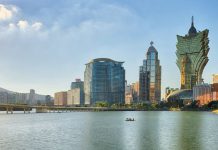 May 6, 2020
SJM Holdings reported on Tuesday a net loss of HK$409 million (US$53 million) in its unaudited 20Q1 financial report to the Hong Kong Stock Exchange, which represented a year-on-year decrease of more than 148 percent. Explaining that the company was “severely impacted by the Covid-19 outbreak,” GGR plummeted by just over 62 percent year-on-year. Vice-Chairman […] 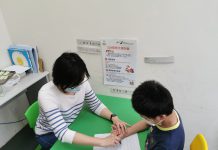 April 28, 2020
Sociedade de Jogos de Macau, S.A (SJM) is supporting the SEN Learning Program launched by the Macau Special Olympics aimed at offering extra learning support to students with special education needs, in response to the Education and Youth Affairs Bureau’s initiative to encourage students to continue learning amid class suspension during the pandemic. The Programme […] 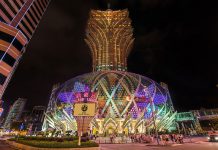 March 16, 2020
SJM Holdings posted a 12.5 percent gain for 2019 and said it was in a solid position to weather the challenges posed by the Covid-19 outbreak.

SJM donates food and daily goods to the poor

March 11, 2020
SJM has announced the donation of 3,000 “Macau Jiayou Bags” which are worth MOP1.5 million (US$200,000) to Macau’s neediest people. Each bag contains rice, noodles, oatmeal, canned food, toilet paper, masks, hand sanitizers, and other daily necessities. The bags will be distributed to 3,000 needy families in Macau, including the elderly, single-parent families, the chronically […]

February 6, 2020
Sociedade de Jogos de Macau, S.A. (SJM) announced a donation of MOP20 million (US$2.5 million) to aid coronavirus control and relief efforts in Hubei province, including purchasing the much-needed medical supplies and protective equipment.  The donation was made under the coordination of the Liaison Office of the Central People’s Government in the Macau SAR. Ms. […]

November 20, 2019
The 8th International Forum on Clean Energy (IFCE) was held in Macau on Wednesday, bringing together over two hundred representatives from government, industry, and academia from around the world to discuss about the green development of the Guangdong-Hong Kong-Macao Greater Bay Area. 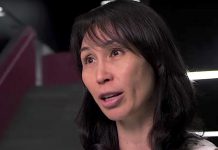 Daisy Ho expects Q3 results to ride into next quarter

November 11, 2019
Chairman and executive director of SJM Holdings, Daisy Ho said that the company is confident the positive results it recorded in 19Q3 will continue for the rest of the year, Macau Business reports.  The company saw profits increase 4.5 percent year-on-year in 19Q3, despite net gaming revenue falling 3.2 percent, driven by a 43 percent […] 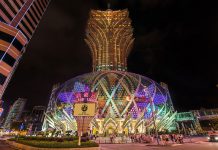 September 12, 2019
SJM Holdings will likely continue to trade at a valuation discount compared to its intrinsic value and that of the other Macau operators, but Bernstein analysts have stopped short of becoming bullish on the stock.  In a note sent by Bernstein analysts on Thursday, the brokerage noted that the delay in Grand Lisboa Palace and […]

July 30, 2019
SJM Holdings reported a 0.7 percent decline in H1 gaming revenue, as growth in the mass market failed to offset a 25 percent drop in VIP revenue.

July 29, 2019
SJM Holdings has pushed back the completion date of its Lisboa Palace resort on Cotai again, this time until about March next year, according to media reports.

July 22, 2019
SJM Holdings CEO Ambrose So said it sees no reason to suspend the group’s contract with junket operator Suncity, despite recent allegations that the junket had engaged in illegal online gaming operations. According to a report from TDM-News, the head of SJM said it viewed the recent controversy as not having an effect on the […]

June 10, 2019
Gross gaming revenue in June is expected to be lower than in the prior two months, but should still gain between 3 and 5 percent, according to analysts at Bernstein Research.

May 30, 2019
Sociedade de Jogos de Macau and China Duty Free Group Co said they have signed a binding agreement for the retailer to open a flagship outlet at Grand Lisboa Palace once it opens on the Cotai strip. 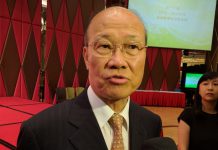 May 27, 2019
SJM chief executive officer Ambrose So said he believes a tourism tax imposed on visitors will “certainly affect the city’s tourism,” local media reports. Last week, the Macau Government Tourism Office (MGTO) made an announcement that it is currently studying whether to impose a tourism tax amidst concern the territory may not be able to […] 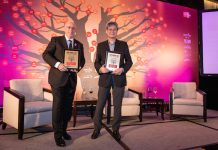 May 23, 2019
Two industry legends were inducted into the Asian Hall of Fame at the Asia Gaming Tree reunion dinner on Wednesday.

May 21, 2019
SJM’s Grand Lisboa Palace will suffer from s slow ramp up, and likely fall behind schedule for its opening, according to Bernstein analysts in a note on Tuesday. While the Cotai property is scheduled to open in late 2019, Bernstein analysts said they have already modeled for the property to open in the first quarter […]

Macau Q1 earnings likely to surprise to the downside: MS

October 8, 2018
Casino operator SJM Holdings has announced the appointment of Paul Baker as the new president of Grand Lisboa Palace, which is expected to open in 19H2. According to reports, Baker took over as president of the IR on October 1, having spent the last four years as the deputy chief operating officer of Resorts World […]

August 15, 2018
A fire that broke out at SJM Holding’s Hotel Lisboa was caused by a short circuit and brought under control within five minutes, local media reports. 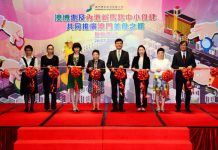 Construction activity could be related to gaming license play

July 24, 2018
A recent uptick in construction activity from gaming-related companies could be a play for a 7th or 8th gaming license, said Union Gaming in their latest “Macau pipeline in pictures” report. On Monday, the brokerage highlighted several projects that “are likely to be used as leverage as it relates to the issuance of a 7th […]

July 20, 2018
The ongoing ‘trade war’ between the U.S. and China will unlikely have any effect on Macau’s GDP, said SJM executive director and CEO Ambrose So Shu Fai on Thursday, Macau Business reports. Mr. So was speaking on the sidelines of an event on Thursday, explaining that there won’t likely be an effect on MAcau as […] 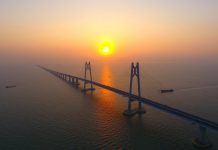 June 13, 2018
Macau gaming operators are planning to launch a joint shuttle bus service which will transport customers along the Hong Kong-Zhuhai-Macau bridge, local media reports.   According to a report from TDM News, SJM vice-chairman and CEO Ambrose So said the service will run from the bridge’s checkpoint building to the ferry terminal and other locations […] 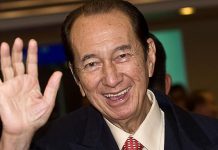 June 12, 2018
Stanley Ho, known as the king of gambling, has formally retired from his post as chairman of SJM Holdings, ending a six-decade career in Macau’s gambling industry. 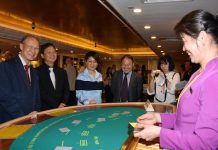 June 6, 2018
SJM Holdings has inaugurated a gallery designed to showcase the long history of gaming in Macau, as well as to promote responsible gambling.

Sands, Melco, Galaxy to benefit most from rise of premium market

May 18, 2018
Macau gaming operators Sands, Melco and Galaxy are best placed to capitalize on the rise of the Chinese premium market, according to Bernstein Research. The brokerage published its latest report, titled “China Consumer: Where to Play, How to Win… Premium is the New Mainstream,” on Friday, covering the latest trends in premium mass spending, preferences […] May 3, 2018
SJM Holdings posted better-than-expected 18Q1 results, but its market share in Macau continued to slip as the Cotai Strip lures away clients. 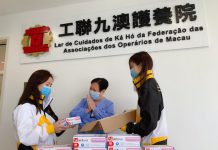 As the Covid-19 crisis descended upon, first, China, then the world, the six Macau operators have not been idle in their CSR efforts, in spite of the mandated casino closures and reopenings under difficult economic conditions. 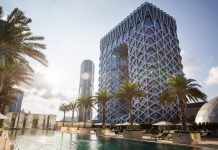 Melco Resorts & Entertainment and MGM China outperformed their peers in the latest reporting season, as the ramp up of new product offerings drove growth. 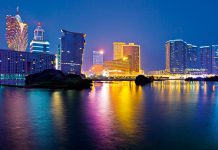 Despite short-term headwinds from China’s slowing economy and trade friction with the U.S., analysts remain optimistic Macau will retain its crown as Asia’s top gaming hub.

Besides being titans in the casino world, there’s something else that Sheldon Adelson, Stanley Ho, Lim Kok Thay and Steve Wynn have in common and this factor may lead to important regulatory repercussions for their business empires. No clarity in casino concession countdown

The first of Macau’s six casino concessions expire in less than 18 months, though the operators who have invested billions in the territory still have no clarity as to how, or even if, those licenses to operate will be renewed.

Macau gaming stocks are feeling the heat from the trade war between the U.S. and China, falling to their lowest levels in a year, with some analysts cutting their growth forecasts on concern for a slowdown in China’s economy.