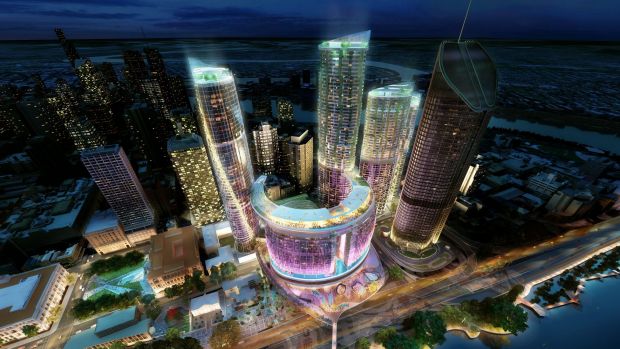 Queen’s Wharf Brisbane is a proposed intergrated resort, developed by The Destination Brisbane Consortium, which includes The Star Entertainment Group (formerly Echo Entertainment Group), Far East Consortium (Australia) and Chow Tai Fook Enterprises—is now the contractor responsible for delivering the world-class tourism, leisure and entertainment precinct in the heart of the Brisbane CBD.The Queen’s Wharf Brisbane development has an expected budget of A$2 billion, the development will include 1,100 premium hotel rooms, over 50 food and beverage offerings and signature gaming facilities.

November 12, 2020
Project marketers overseeing the Queen’s Wharf Residences development in Brisbane have reported the sale of more than 90 percent of the apartments in the Star Entertainment Group, Chow Tai Fook, and Far East Consortium backed megaproject. 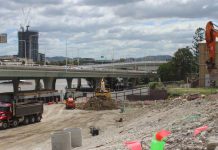 June 24, 2019
Construction has begun in earnest on SkyCity Entertainment’s $3.6 billion Queen’s Wharf Brisbane Development, with heavy machine moved onsite over the past weekend.

June 5, 2019
Additional hotel capacity at the Queen’s Wharf project will see the Star Entertainment Group (SGR) generate an additional A$43 million (US$30 million) in earnings per year starting in FY24, according to analysts from J.P. Morgan. Around 1000 rooms are being added to the project, which is set to open its casino and hotels in FY23. […]

May 30, 2019
After 15 months of excavation, the Queens Wharf Brisbane project has officially begun its “out of ground” construction, with its first concrete pour, according to a project update from the developers. Destination Brisbane Consortium Project Director Simon Crooks said the first footing pour was a significant occasion for the project as it was the start […]

October 12, 2017
Construction firms will soon tender for the excavation works at The Star’s Queen’s Wharf project in Brisbane’s riverfront, The Australian reports. The excavation will include digging six stories for basement works and a 5000-bay carpark, with work conducted to be valued at about A$40 million. The Star Queensland managing director Geoff Hogg said the excavation […] 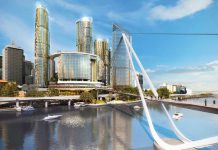 February 21, 2017
The consortium behind a proposed A$3 billion (US$2.3 billion) casino resort in Brisbane has been forced to re-draft its plans for the bridge that connects South Bank to the casino, The Australian reports. Plans for the A$100 million public access bridge, set to be called the “Neville Bonner Bridge’’ was sent back after it was […]

October 31, 2016
Chow Tai Fook Enterprises Limited has entered into negotiations for the ownership of Baha Mar, said the company in an announcement on Friday. The company has applied to the Government of The Bahamas for approval as a proposed investor and acquirer of the Baha Mar Resort. CTFE  is known also for its involvement in developing […]

October 23, 2016
An international joint venture led by Star Entertainment is finalizing a deal to pay up to A$160 million ($121.7 million) for a beachfront resort in Queensland, local media reports. The gaming company, which is working in conjunction with Hong Kong developer Far East Consortium and retailer Chow Tai Fook, is hoping to see a revamped […] 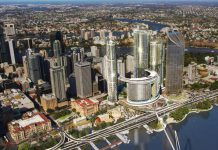 August 26, 2016
Australia-listed Star Entertainment Group says strong earnings growth continued in its full year 2016, with good revenue growth across all lines of business. In a filing to the Australian Stock Exchange on Friday, the casino operator reported normalized net profit after tax of A$241.3 million ($183.9 million), up 23.4 percent, and normalized EBITDA of A$556 […]

May 16, 2016
Australian casino operator Star Entertainment is set to announce a further investment in its Queen’s Wharf casino development on the Gold Coast, reports Brisbane Times. The operator, previously already announced plans for a $850 million development of its Jupiter’s site, with two towers including a 4.5 star hotel in the first stages of construction. On […] 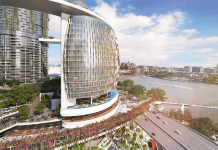