INSPIRE is located within the Incheon International Airport’s IBC development area. Incheon International Airport not only serves as a gateway to Korea, but also as a hub to Northeast Asia. Directly accessed by 200 cities covering 60 countries. INSPIRE will create a unique destination for hospitality and entertainment serving both local Koreans and tourists from around the world.

November 13, 2020
The Incheon Free Economic Zone Authority announced on Thursday that the Inspire Resort, which is to be foreigner-only casino resort project in Yeongjong Island incheon, has filed a foreign direct investment report of US$200 million.

October 20, 2020
Both Caesars Korea and Mohegan’s Inspire Resort have suspended construction of their facilities in Incheon for months, with no word on when the building will continue. The outlook for the Caesars IR is particularly cloudy.

Mohegan Gaming swings to profit in first quarter of FY18

February 2, 2018
Tribal gaming operator Mohegan Gaming and Entertainment reported net income of $29.2 million for the first quarter ended December 31, 2017, compared to a loss in the prior year period. MGE said the swing to profit in the quarter reflected the impact of a $73.8 million loss on modification and early extinguishment of debt that […] 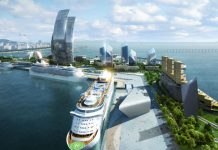 September 13, 2017
A new cruise ship terminal is set to be built just 5km from Incheon International Airport, with the aim of boosting passenger traffic to the airport and its two neighbouring resort complexes, the Chosun Iibo reports. Expected to be completed by 2021, the new cruise terminal is estimated to cost between KRW200 to KRW500 billion […]

May 9, 2017
U.S. tribal casino operator Mohegan Sun has signed new agreements with the Incheon International Airport Corp. in relation to the development of the Inspire Integrated Resort in Incheon, South Korea. Mitchell Etess, president and chief executive of Mohegan Sun, said the group had signed a development services agreement, which will grant Mohegan Sun a total […]

August 2, 2016
A consortium led by U.S. casino operator Mohegan Sun has signed an agreement with Incheon International Airport Corporation to build an integrated resort on Yeongjong Island by 2020. Inspire Integrated Resort, which includes KCC Group and Mohegan Sun, signed the agreement to use land spanning 2.67 square kilometers on the island west of Seoul. The […]