The Cagayan Economic Zone Authority (CEZA) is a government owned and controlled corporation created by virtue of Republic Act 7922, otherwise known as the “Cagayan Special Economic Zone Act of 1995”. The Cagayan Special Economic Zone and Free Port (Cagayan Freeport) is located at the country’s northeastern tip, a strategic location for dynamic enterprise development. The location is at the crossroads of international shipping lanes and is thereby open to a number of lucrative markets which include Japan, China, US West Coast, Hong Kong and Taiwan.The CSEZFP encompasses the entire municipality of Sta. Ana in Cagayan Province as well as Fuga, Barit and Mabbag islands in the municipality of Aparri. These areas are characterized by its untapped natural and economic resources. The Zone, 54,118.95 hectares large, is poised to become the one of the country’s most important agro-industrial, commercial, tourism, recreational and transshipment hub. 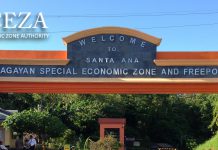 October 3, 2018
Pay8, a Fintech company, represented by chairman Kirk Arambulo, has signed a Memorandum of Understanding with Secretary Raul Lambino of the Cagayan Economic Zone Authority (CEZA). Pay8, which is a majority owned subsidiary company of HatchAsia Inc., is providing the CEZA Zone with last mile connectivity using their proprietary platform to enable online payments in […]

July 30, 2018
The Cagayan Economic and Freeport Zone Authority has received letters of intent from four separate gaming firms to establish integrated resorts within its province, local media reports. During a press conference, Secretary Raul L. Lambino, administrator, and CEO of the CEZA said that the gaming companies come from Hong Kong, Malaysia, Japan, and Korea. CEZA […]

CEZA positions itself as crypto hub

May 22, 2018
The Cagayan Economic Zone Authority (CEZA) has signed its first 15 offshore companies to its new fintech solutions and blockchain hub in northern Luzon. The offshore companies will bring at least P1.7 billion (US$32.5 million) in fresh investments over the next two years, and include cryptocurrency companies engaged in virtual currency exchanges, crypto mining, blockchain […]

CEZA aims to be silicon valley of Asia

The Cagayan Economic Zone Authority (CEZA), an economic Freeport zone in the north of the Philippines, has been making good on a plan to transform itself into a Fintech hub, with demand for licenses outstripping potential supply by almost three times. CEZA was the Philippines’ online gambling hub before President Rodrigo Duterte shook up the […]